Restoration of a Prized Victrola Phonograph

This prized 1908 Victrola model VV-XX phonograph arrived at our studio with a deteriorated finish delaminating veneer and extensive wear to the gilt ornamentation.  This floor-standing model features an internal horn and has an unusually decorative cabinet with premium mahogany book-matched veneer on the doors as well as gilded, dimensional foliate scrollwork on the corners, sides, and feet.

The cabinet is not only beautifully designed, but also includes built-in storage.  The underside of the lid still retains the color ‘Victor Victrola’ logo, as well as the original metal manufacturer plate with the model and serial numbers. 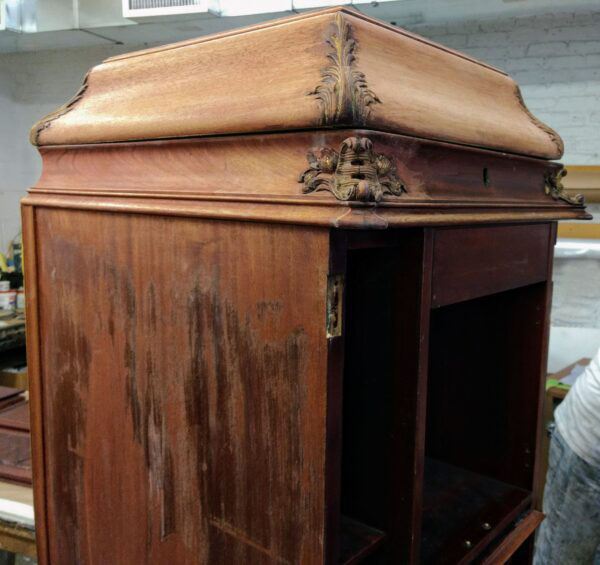 1908 Victrola model VV-XX phonograph at our studio before restoration

Made by the Victor Talking Machine Company, it was advertised as “Victrola of the Twentieth” and was promoted as the deluxe version of the VV-XVI, it was sold at a premium price for its day for $300.00.   Only 500 models were manufactured, and after a $50.00 price drop, the model was discontinued almost a year later.  Given the degree of deterioration and wear of the existing finish, it was determined that to achieve the best results and return the phonograph to its previous glory, the cabinet would need to be refinished. 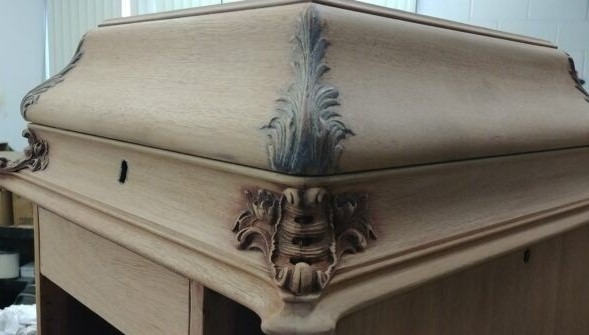 The Victrola model VV-XX phonograph at our studio after removal of the deteriorated finish.

The hardware on the cabinet was cataloged, removed, and cleaned.  The degraded finish was stripped from the surface to reveal the raw wood beneath.  The lifting veneer was resecured to the cabinet structure with hide glue.

The Victrola model VV-XX phonograph at our studio during restoration shows stages of staining and sealing the finish.

The new mahogany finish was applied in several coats, allowing each to cure and dry.  Once the desired tonality was achieved, a final clear coat of varnish was applied and then polished.  With the finish on the cabinet complete, the decorative ornamentation was gilded using a 22k gold leaf.  The hardware was then reinstalled onto the cabinet, completing the project. 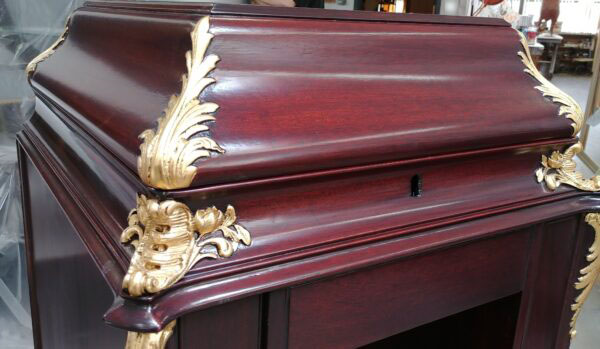 The antique Victrola model VV-XX phonograph during restoration after 22k gold leaf was applied to the ornamentation.

The restored Victrola is now proudly displayed in a private collection. The piece is not only an eye-catching highlight in the collection, but it is also functional.  Both as a sound piece, but also, for storage.  Conservation and restoration of antiques and furniture allow not only for visual impact but can lengthen the utility of a piece for today as well as for future generations to appreciate and enjoy. 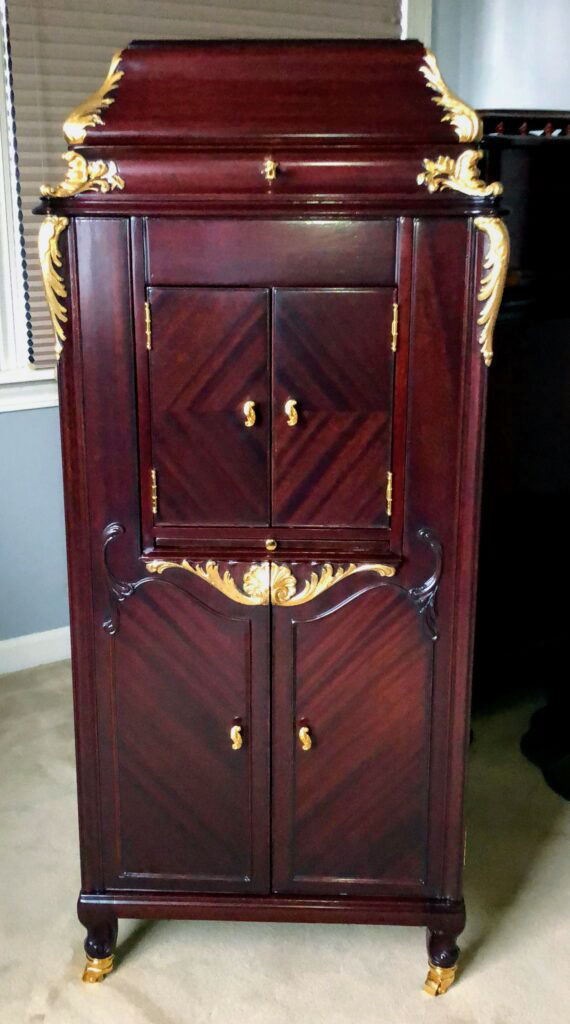 The antique Victrola phonograph after the completion of the restoration.

Contact Artifact today to evaluate your antiques and collectibles for restoration.